In Belgium’s forested, hilly Ardennes region, there is a valley called Vallée des Fées (Valley of the Fairies) and at the bottom of that valley there is a tiny village called Achouffe. In this village there was once a cowshed, and in that cowshed a tiny brewery was born.

Brasserie d’Achouffe was started by Pierre Gobon and his brother-in-law Chris Bauweraerts in 1982, which was a dark time for Belgian brewing. With the number of excellent breweries thriving in Belgium today, it’s easy to forget that Belgium, like North America, went through an age of industrial lagers. 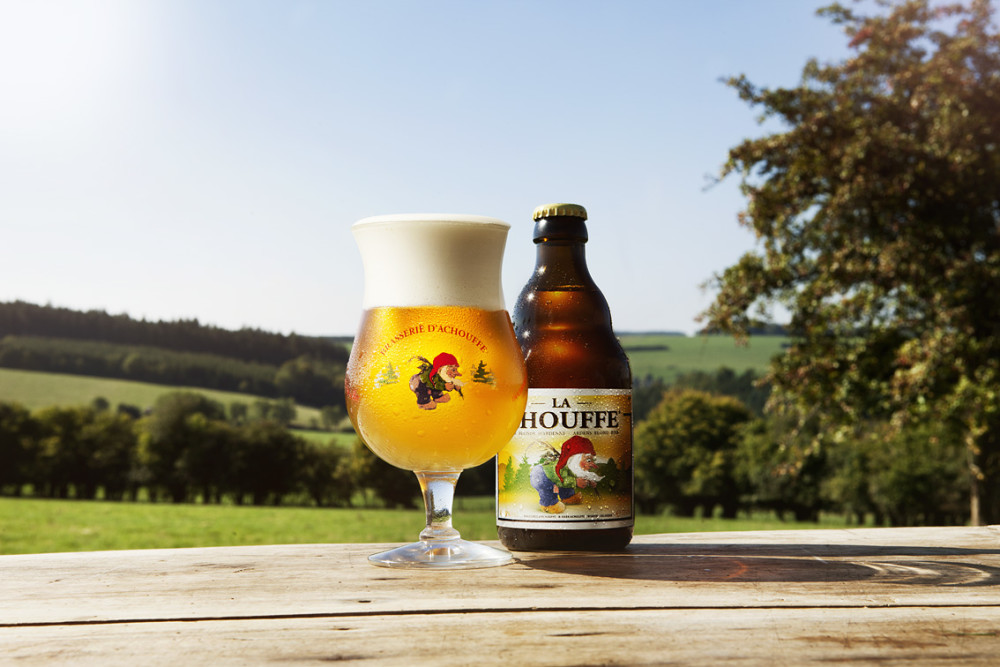 Of the more than 3000 breweries that operated in Belgium in the early 1900s, only 750 survived both world wars. The wars were tough on Belgium’s small breweries: those that weren’t outright destroyed had their equipment requisitioned by the metal-hungry German army.

When the smoke cleared and reconstruction began, things got really tough for small Belgian brewers. Light, pilsner-style beers came into style in a big way, and improvements in refrigeration and transportation made it easier for enormous industrial breweries to distribute nationally. All across Belgium, small breweries that had been making regional styles of beer for generations went bankrupt. By the end of the 1970s, seven breweries were responsible for 75% of the beer made in Belgium. More than half of the country’s beer was brewed by just two breweries: Artois and Jupiler.

Today we can only imagine how many amazing styles of beer were lost with the closing of so many small breweries. In fact, witbier, that classic style of Belgian wheat ale that is now the darling of British Columbia’s craft brewers, was actually extinct.

But in the midst of the carnage, Belgian brewing showed glimmers of hope. In 1966, brewer Pierre Celis resurrected witbier when he opened a brewery in the village of Hoegaarden. Then in the early 1980s a few upstart breweries began to emerge.

Anyone who has witnessed the explosion of craft brewing in the US and Canada over the last 30 years will recognize the story of Belgium’s beer renaissance: a few dedicated homebrewers, bored of industrial lagers and nostalgic for what beer tasted like in the “good old days”, started tinkering in their kitchens. They got their hands on some old tanks from the dairy industry, cobbled together makeshift brewing equipment and started a revolution.

Among them were Achouffe’s Pierre and Chris. Brewing with a lauter tun crafted out of the drum of a washing machine, they began hand-filling and hand-corking repurposed champagne bottles and selling their brew to locals.

To compete with the flood of industrial lager washing over Belgium, Pierre and Chris would need an amazing yeast, one that could complement their blonde ale with a balance of subtly spicy phenols and juicy, fruity esters. Fortunately for them, when they went to one of the few remaining local small breweries with a bucket, they got a yeast capable of turning their hobby into an empire.

Continue Reading A Pilgrimage of Yeast