A year after we were turned back at the walls of Westvleteren, Erin and I pedaled our bikes through the wooded hills that shield the Orval abbey from the secular world. Despite being jetlagged from the transatlantic flight the night before, I could hardly contain my excitement. We were about to tour a real Trappist brewery. Although the Orval brewery normally only admits visitors one day a year, Erin had leveraged her journalistic credentials to arrange a private tour.

Orval is a legend in its own right. The monastery produces only one beer, but that beer is totally unique. Orval is a copper colour and pours with a rambunctious, foamy head, and it tastes unlike any other pale ale on the planet. The beer has the hops of a pale ale, sure, but there’s something else; there’s a peppery mystery and a murmuring of dark berries.  As the beer ages, it changes to a greater extent than any other beer I’ve ever encountered. 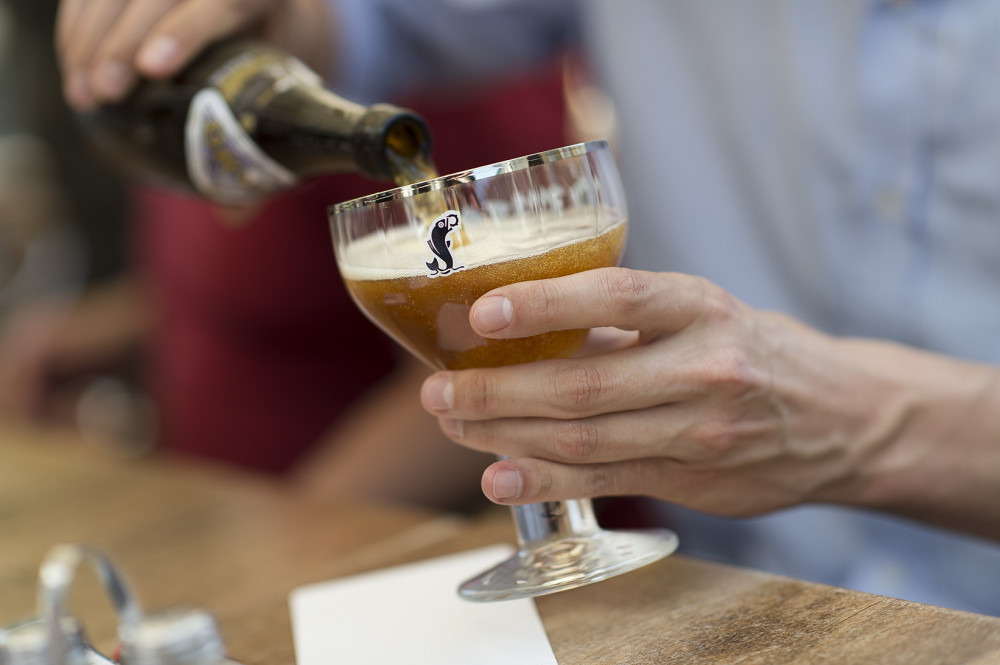 As an Orval gets older, the hop aroma fades into the background and the nose is taken over by pepper and berries, and by a magnificently bucolic aroma of horses and meadow grass.  Local beer enthusiasts in Florenville and other surrounding villages always check the date on a bottle of Orval before pouring it, and many are known to cellar freshly-bought beer until it reaches their preferred age.

Some like it fresh, but most of the locals prefer their Orval aged for one to two years. One local man is reputed to have cellared a quantity of the beer for three years for his daughter’s wedding, although it’s not clear how he had three years’ notice. 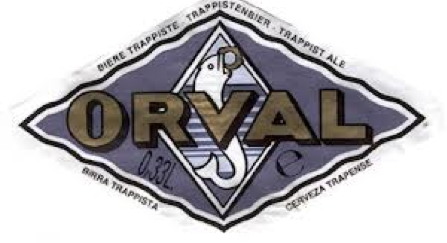 Amid the ruins of the old twelfth century abbey of Orval, near a 300-year-old oak tree, Erin and I found a clear pond, fed by the same spring that supplies the brewery with water. The pond is said to be the site of the legendary scene depicted on Orval’s label: a trout surfacing, bearing in its mouth a golden ring lost by a countess, causing her to declare that this is indeed a valley of gold (val d’or; thus or-val). Inspired by a reverence that had more to do with the brewery than the abbey, Erin and I knelt and tasted the pool’s clear waters.

Leaving the old abbey’s ruins, we passed the new abbey and entered the brewery for our appointment with vice president François de Herenne. The atmosphere of the brewery was certainly less fraught with romance and legend than the abbey ruins had been. There wasn’t a single monk or a single bubbling copper cauldron in sight. Instead, we were given a tour of a thoroughly modern brewing facility complete with a computerized control room.

Looking for a hint of ancient tradition, I asked François whether the current beer bore any resemblance to the beer the monks brewed in the Middle Ages.

His answer, given without hesitation, was an emphatic no.

The Abbaye Notre-Dame d’Orval was established in the 12th century and its monks almost certainly brewed beer from the beginning, but the abbey was destroyed during the French Revolution and the order dispersed, leaving behind little more than romantic desolation and a spring-fed pond.

The abbey was re-established in the 1920s, and in 1931 the brewery was opened to help fund the reconstruction of the monastery. The beer owes its recipe to the first two brewers from this period: the first was a German, who followed the German way and brewed something crisp and hoppy, and the second was a British-trained Belgian who introduced British techniques, including infusion mashing and dry hopping.

This is the reality of contemporary monastic brewing. There are no ancient copper vessels, no arcane 800 year-old recipes and monks are seldom seen in the brewery.

Monastic breweries are now professionally managed and operated by lay staff. The beers are made with modern brewing equipment and the recipes are of relatively recent origin. All of the Trappist monasteries in Belgium stopped making beer at some point in the last couple of hundred years. Recipes have been tweaked and new beers have been invented to keep up with changing tastes. When you bring a trappist ale to your lips, you are drinking a very good brew, but you are not drinking an ancient brew.

What I saw at Orval was a very modern brewery with a secular staff.  What I tasted was one of the most distinct, unusual and complex beers in the world. And what I learned is that you don’t have to be a monk to brew it.

But there is another cloistered population of tireless workers without whom Belgian beer would be impossible to make.

Continue Reading The engine of fermentation