IX Can we brew it here?

In my first post of this ode to Belgian beer, I promised to answer some questions:

What is Belgian beer? And, can authentic Belgian-style beer be brewed here? I’ve spent the past few weeks answering the first question. I hope I didn’t ruin the magic by peeking under the monks’ robes. But that leaves that second question: can we brew it here?

Well, I don’t need monks, which is good, because I don’t have any. I can get the yeast from Oregon. Hops and malted barley are global commodities.

One brewery in Belgium is wood-fired. At Brasserie Caracole, François Tonglet and his fellow brewers light a fire the day before a brew and they spend their brewing day feeding four-foot lengths of wood into the oven beneath the kettle and hot water tank, taking care to keep the fire hot enough to boil the wort, but not so hot that the wort boils over. 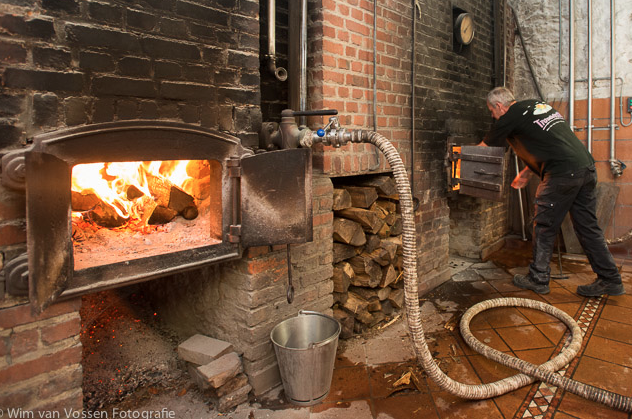 François taught me that if you’re dedicated to it, if you’re obsessed with the details and willing to do the work, you can brew good Belgian-style beer on any workable brewing system – including the little brewpub system I’ll be using.

Which brings me to another vital ingredient in any good Belgian-style beer: obsession. I encountered some kind of obsession at every Belgian brewery I visited. The brewers I met love the beer they brew, and they obsess over the details of how to make good beer – even if they obsess over completely different details.

Nico Bacelle at Brouwerij De Ranke is content to ferment his beer using a fairly pedestrian variety of dry yeast, but is obsessed with hops. He bemoaned the present state of Belgian brewing and how none of the major breweries use nearly as much hops as breweries used in the good old days. Nico went as far as having an asymmetrical direct-fired boil kettle custom-built for him, because he is convinced that the rolling boil it provides keeps the hops in circulation and extracts the maximum amount of flavor from them. Nico obsesses over the hop harvest and uses as many locally-grown hops as possible so he can inspect the crops himself.

Glenn Castelein at Brouwerij Alvinne barely mentioned hops in the hours I spent with him. Instead, he is obsessed with aging beer in wine barrels and with his fermentation culture. He and his partner use a proprietary culture that includes a strain of brewing yeast, a strain of wild yeast, and a strain of lactic acid bacteria, which they propagate afresh for every brew. The brewers of Alvinne take trips to the wine regions of France and Spain to hunt for the exact right wine barrels to age specific batches of beer in. Glenn bemoaned the present state of Belgian brewing, saying that none of the major breweries’ sour beers are as sour as they once were.

So, I’ll need obsession. I’m pretty sure I have it. If I need any supplemental obsession I won’t have to look any farther than Vancouver’s vigorous, inventive and unruly homebrewing community.

But there is one final ingredient a brewery needs to successfully brew beer. The ingredient is very local, highly influenced by terroir, and changes enormously with seasons: Drinkers.

Beer can’t be brewed if there’s nobody to drink it.  The real reason Belgium has such an amazing variety of complex and interesting beers is because Belgian drinkers love complex and interesting beers.  I can source a strain of Belgian yeast and find the malt and hops that will produce the subtle Belgian flavours I want, but I can’t import Belgians to drink the beer. And I’m making a pretty big bet that I won’t have to.

I know that if I’d tried to start Dageraad Brewing 10 years ago, it would have died from lack of demand. But times are changing, and British Columbia’s beer culture is changing, too. A lot of breweries have released seasonal Belgian-style beers, and a few breweries already have saisons and witbiers in their year-round lineups. Dageraad will be the first brewery in British Columbia dedicated to making nothing but Belgian-style beers, and I’m betting that you’re ready for it.

There are two parts of this equation, mine and yours.  For my part, I’ve changed careers, gone to brewing school, found a space, secured permits and licenses from four levels of government, and spent a ton of borrowed money setting up a brewery so I can brew the beer I love.

Your part is simpler: drink the beer and tell your friends about it.

British Columbia’s beer culture is experiencing a new dawn. Dageraad Brewing will be part of it.