VIII A Pilgrimage of Yeast

Plunging down the steep hill into the Vallée des Fées I could smell my bike’s brakes smoking. Torn between the exhilaration of the descent and fear of repeating a previous year’s crash, between my impatience to drink La Chouffe and my desire to have two intact clavicles, I braked my weird little folding bike into the corners and let it run fast down the straightaways.

Erin and I were on a pilgrimage to the reputed origin of my yeast. 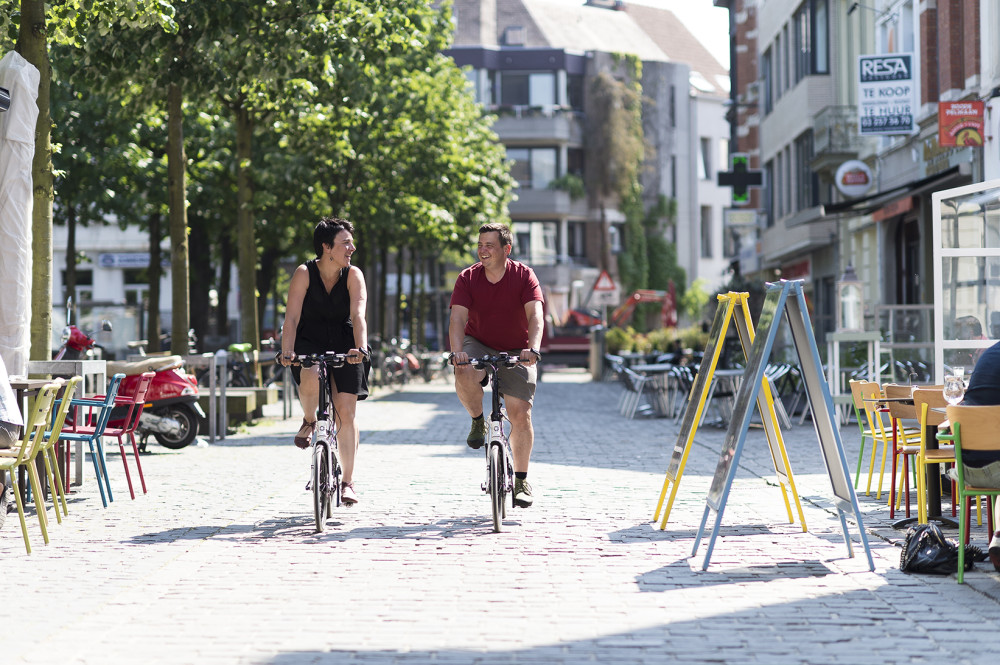 We were given a private guided tour of the brewery, which is in the same location, but is technologically a far cry from Chris and Pierre’s original setup, with its washing-machine-drum lauter tun. The present brewery is a large facility with rows of enormous outdoor fermentation tanks looming overhead. Our helpful guide answered every question I asked him, right down to the mash and fermentation temperatures, practically daring me to make a beer as good as theirs.

But the real point of our visit was in the brewery’s café. I wanted to taste one of my favourite beers while it was as fresh as possible, right outside of the brewery’s doors.

All beer begins to change subtly as soon as it’s bottled, in some ways for the better, in others for the worse. Hop aromas fade, chemical processes slowly create new esters, and no matter how well-packaged the beer is, oxygen inevitably finds its way in.

Many stronger beers, such as barleywines and Belgian quadruples, are built to withstand age and can be much more complex after three or five years of careful aging than when they’re fresh. Lighter, crisper, hoppier beers are almost always better fresh.

A strong beer stored in a dark place with cool, stable temperatures can slowly evolve into something truly magical, but no beer is better off after all the jostling, temperature fluctuations and time spent sitting on docks in shipping containers involved in shipping a beer overseas. I never had a worse Sierra Nevada Pale Ale than one I drank in Britain, 8,000 kilometres from where the beer was brewed. Fortunately, Belgian beer can withstand transportation better than a 5% alcohol pale ale. Higher alcohol levels and bottle refermentation help to ward off bacteria and oxygen, making Belgian beer more resiliant than most.

I’ve been drinking La Chouffe and Chouffe Houblon on tap at Vancouver bars like Biercraft for years now, and I’ve always loved both, even after their long voyage. It was a different story drinking them a hundred meters from the boil kettle.

Drank fresh, La Chouffe is a bit different than it is at home; I wouldn’t say it’s remarkably better, just different. The fruity esters are a bit less pronounced, the hop character a little more present. But Chouffe Houblon is a completely different story.

Brasserie d’Achouffe invented the Belgian IPA style by brewing Chouffe Houblon in 2006, when an American importer asked for a beer that would cater to the hop craze sweeping America. The beer was originally designed to be exported, which is unfortunate, because it tastes much better if you drink it fresh. A hundred meters from the brewery, the beer delivers an explosion of American and European hop aroma, coupled with the fruity esters of Achouffe’s famous yeast.

No Belgian IPA brewed on this side of the Atlantic has ever equaled the original, but I can’t blame brewers here for trying. It’s a style of beer that just doesn’t taste the same if you drink it too far from where it was brewed.

Continue Reading Can we brew it here?